In cooperation with network of national cultural institutes of the European Union (EUNIC) and TAM TAM, we have prepared an all-Ljubljana poster poetry campaign. Until 27 August, you can read verses of five established European poets at the TAM TAM city poster sites in Ljubljana.

Krisztina Tóth (1967, Hungary) is one of the most read and popular Hungarian writers and has received numerous prizes and awards for her work. She studied literature and spent two of her university years in Paris. Tóth teaches creative writing and she worked for some time as a stained-glass window designer. She published ten poetry collections and six books of prose. The novel Akvárium (»Aquarium«) was shortlisted for the prestigious German Internationaler Literaturpreis award in 2015. Tóth also writes for children and youth, tackling taboo subjects. Her poetry has been translated into many languages and included in various anthologies. She also translates from French. 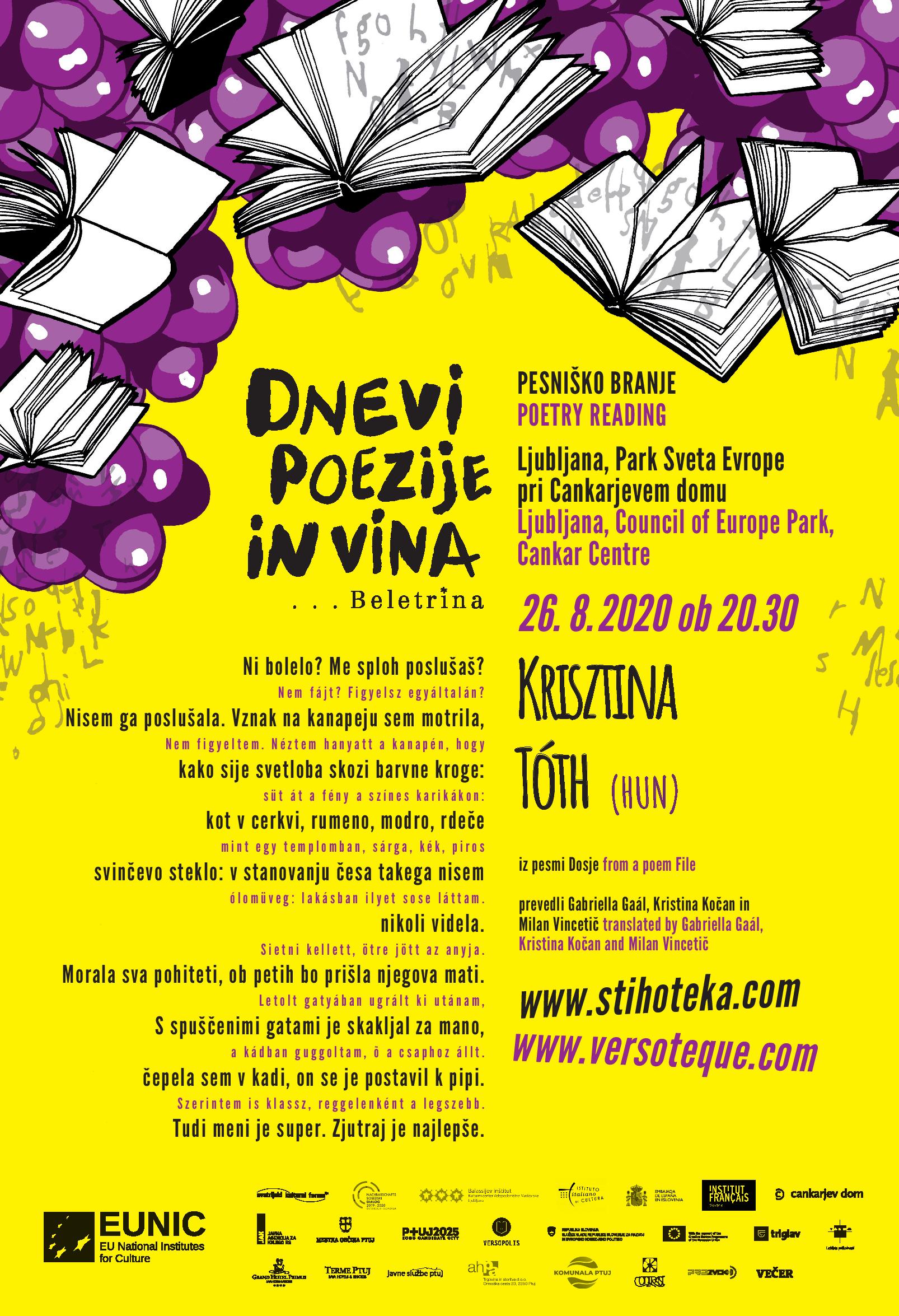 Sonja Harter (1983, Austria) lives in Vienna. Since 2001 she has been publishing in literary magazines, anthologies and at the ORF Radio. She has published four collections of poetry – barfuß richtung festland (2005), einstichspuren, himmel (2008), landpartiestorno (2015), katzenpornos in der timeline (2020) – and the novel Weißblende (2016). Harter was awarded several prizes and scholarships, such as the Graz City Literature Prize (2005), the Frauen.Kunst.Preis award (2006), Wienerstipendium (2010), several working scholarships, and the BKA book prize for her novel (2016). Harter works as art editor at the Austrian Press Agency. 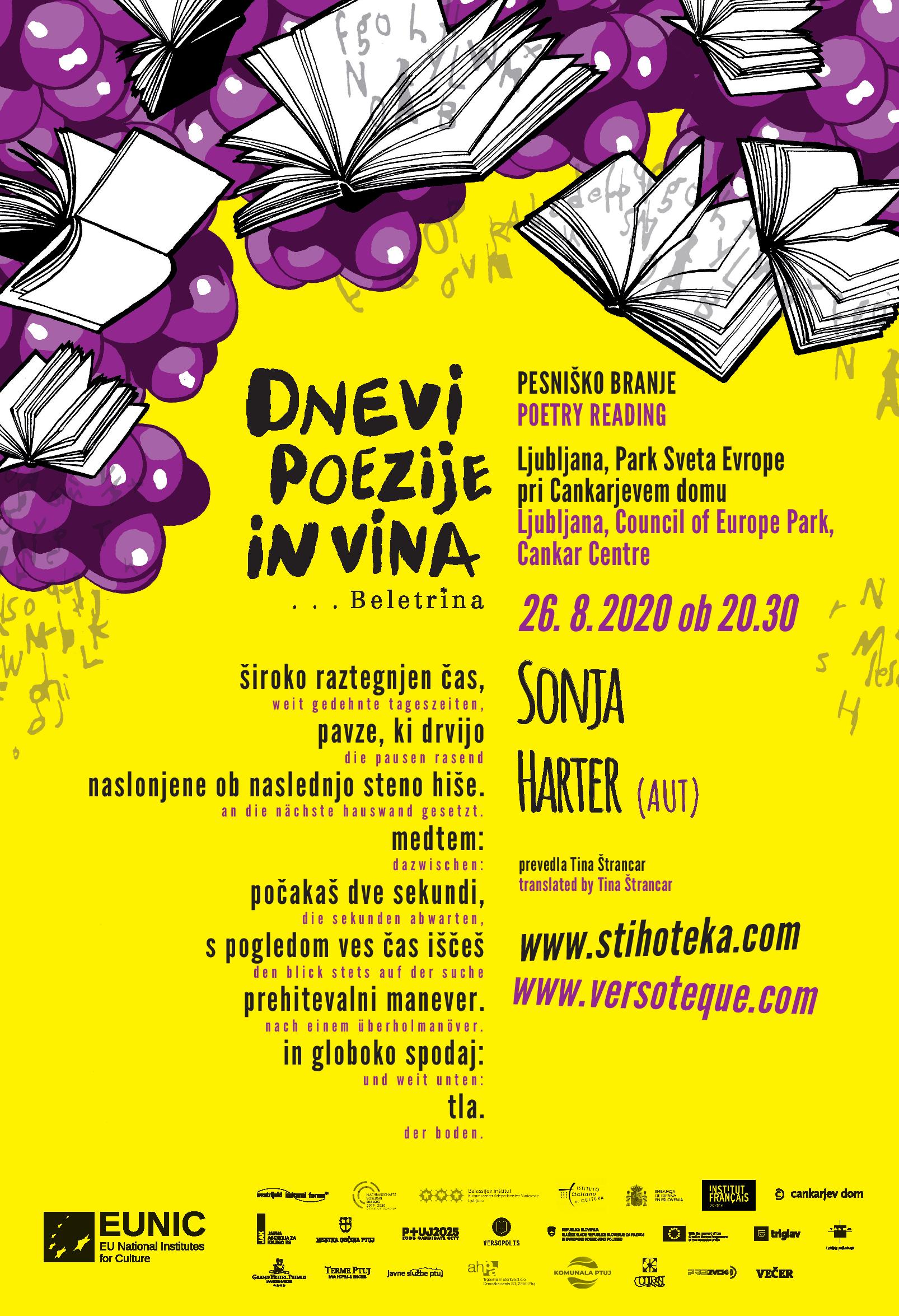 Ariel Spiegler (1986, France) was born in Sao Paulo. She studied philosophy at the Sorbonne University. She taught philosophy for several years and later decided to dedicate herself to writing. In 2016, she started publishing her poems in various reviewed publications. A year later, Spiegler published her first poetry collection C’est pourquoi les jeunes filles t’aiment, which was awarded the Prix Apollinaire Découverte. Her second book Jardinier was published in 2019 in Gallimard’s Blanche series. She sings in bars and works every now and then for a number of publishers. 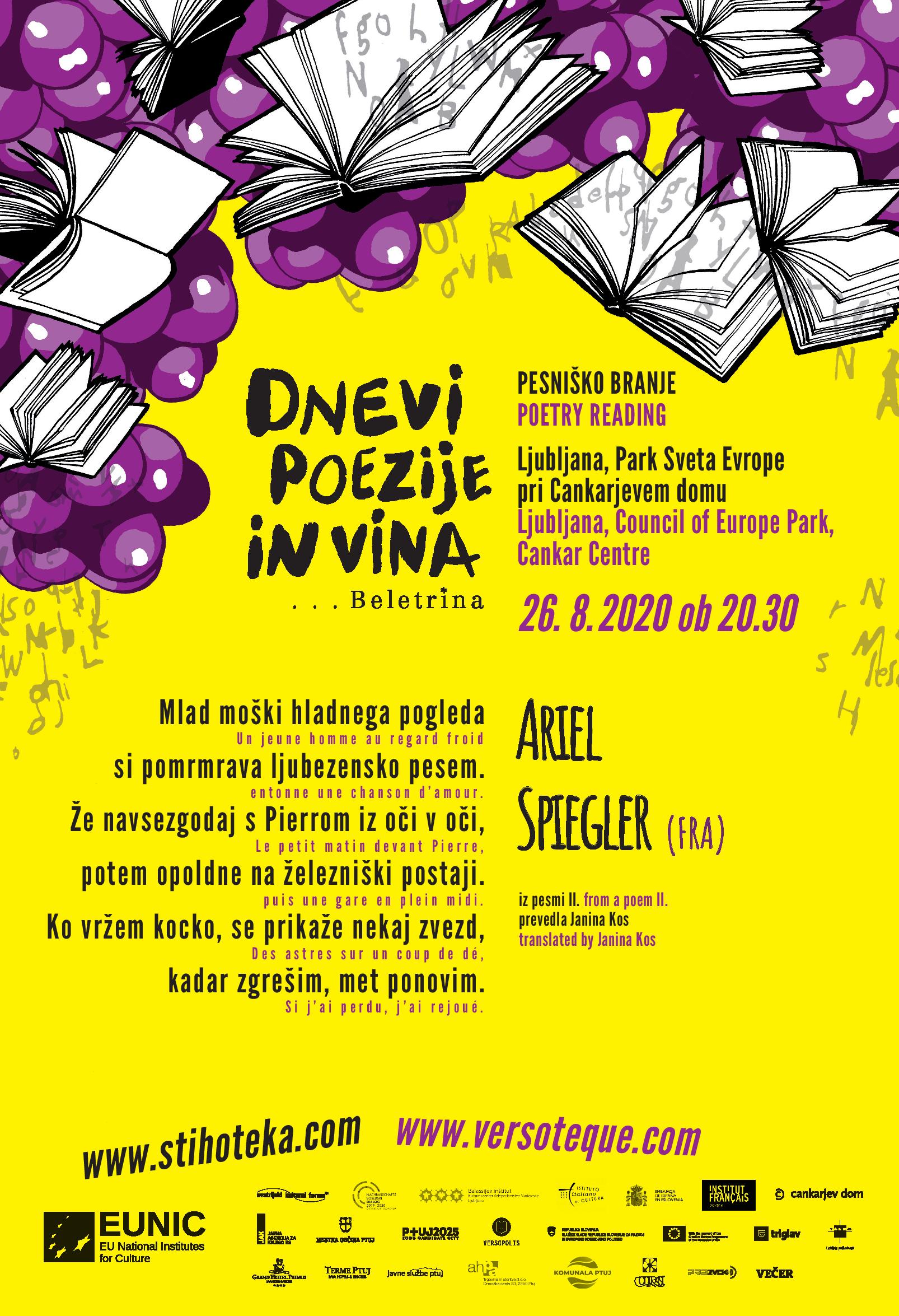 One of the most recognizable contemporary Italian poets Patrizia Cavalli (1947) is the author of seven poetry collections: My Poems Won't Change the World, Heaven, Poetry 1974–1992, My Unique Self, Always Open Theater, Lazy Deities and Lazy Destiny, Christopher and the latest collection poems in prose With Japanese Steps. She has received numerous awards for her work, including the Viareggio-Repaci Award and the Dessì Award. 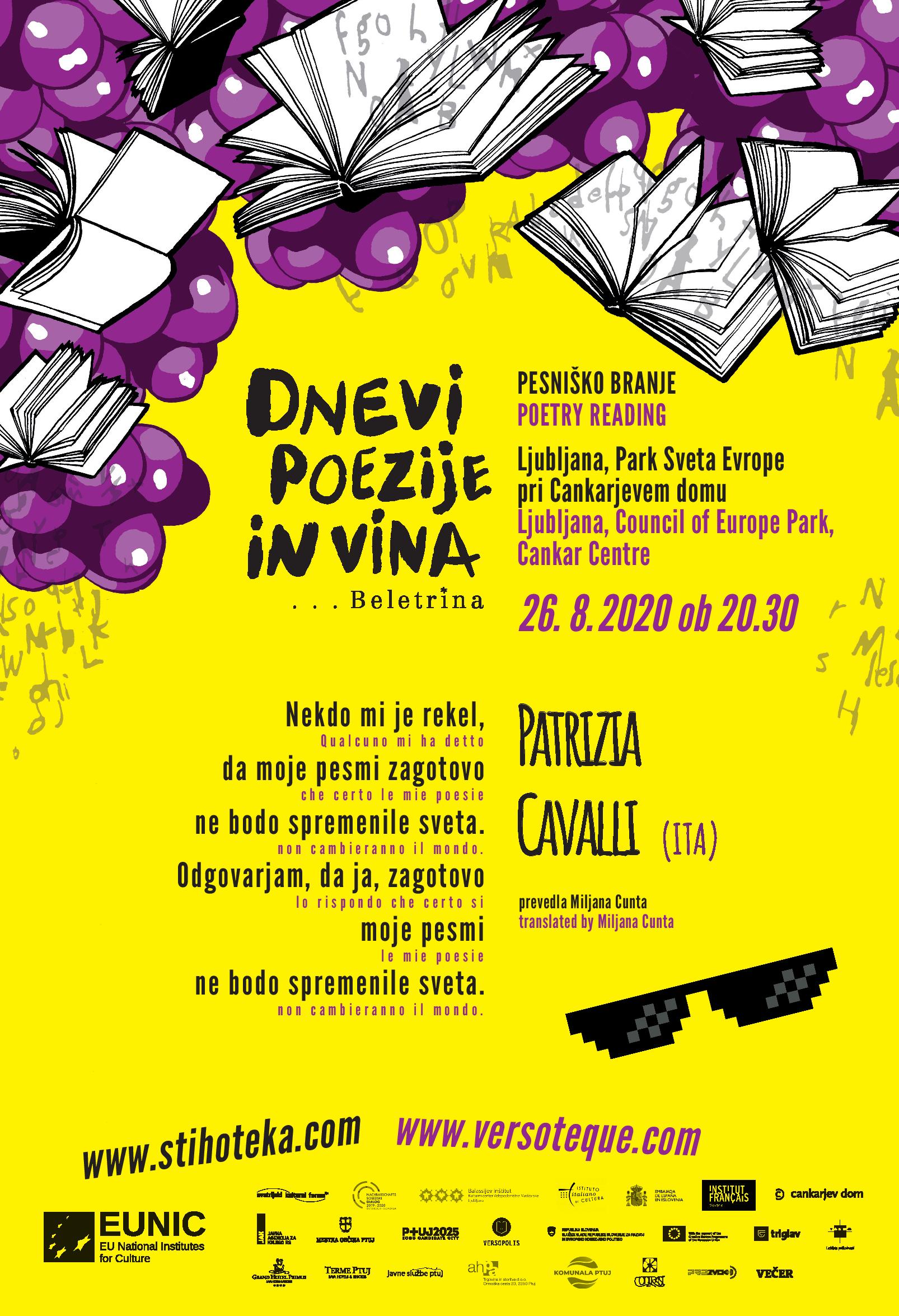 Fernando Valverde - supported by Embassy of Spain in Ljubljana

Fernando Valverde (Granada, 1980) has been voted the most relevant Spanish-language poet born since 1970 by nearly two hundred critics and researchers from more than one hundred international universities (Harvard, Oxford, Columbia, Princeton, Bologna, Salamanca, UNAM and the Sorbonne).
His books have been published in different countries in Europe and America and translated into several languages. He has received some of the most significant awards for poetry in Spanish, among them the Federico García Lorca, the Emilio Alarcos del Principado de Asturias and the Antonio Machado. His last book, The Insistence of Harm, has been the most-sold book of poetry in Spain for months and has received the Book of the Year award from the Latino American Writers Institute of the City University of New York. 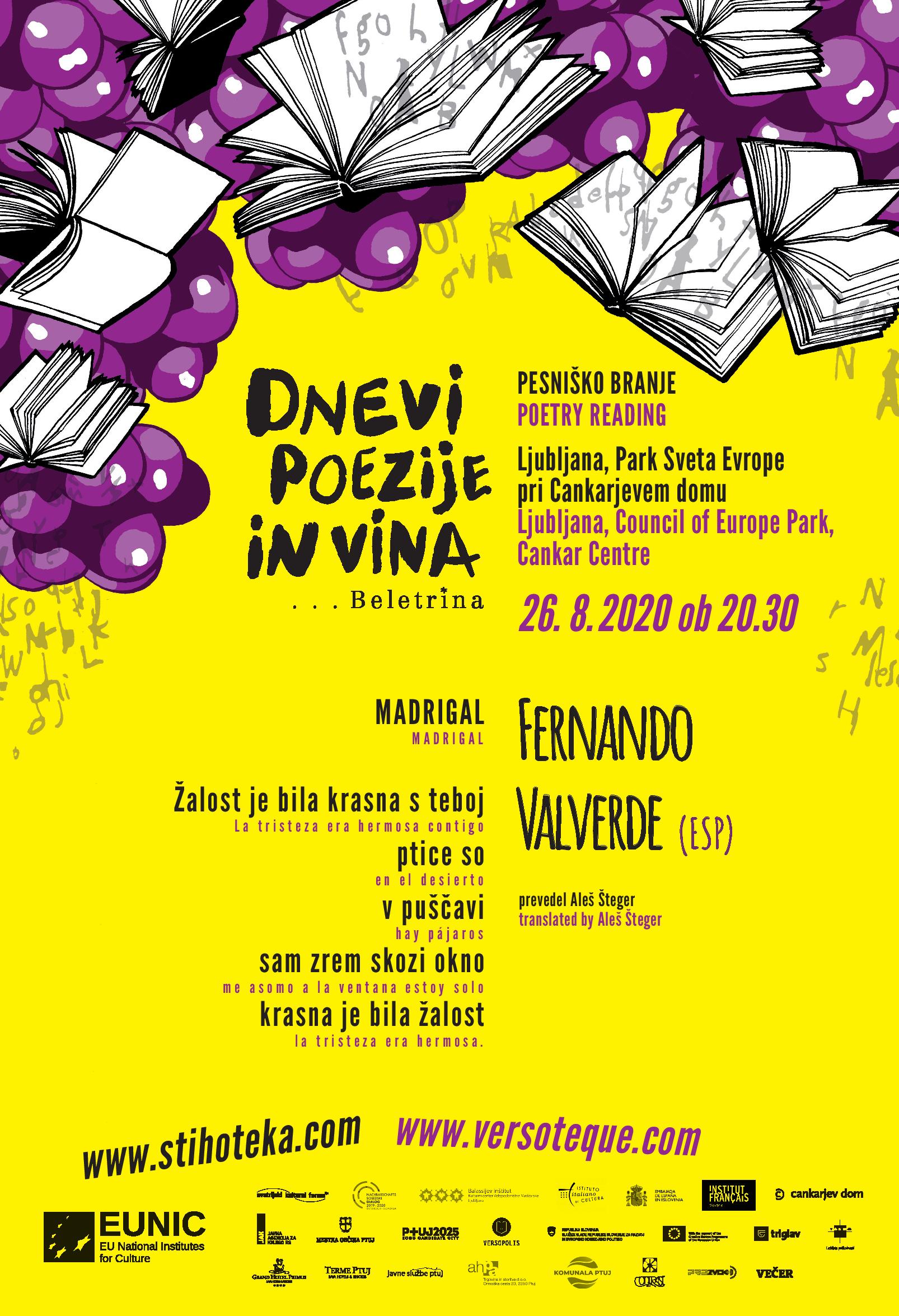 You are also invited to join us at the event in the Park of the Council of Europe at Cakar Center on Wednesday, 26 August 2020, at 8.30 pm, when three of the poets Krisztina Tóth, Ariel Spiegler and Sonja Harter will also read their poetry live.